On Saturday, after 34 days, the #FightForDyett hunger strike came to an end. The very same day, I was lucky enough to speak with Jitu Brown about the end of the hunger strike. You can listen to my full, uninterrupted, interview with Jitu here.

The hunger strike may have ended, but the #FightForDyett is far from over. NPE is proud to have stood behind the parents, grandparents and community members at Dyett High School whose actions reopened the only neighborhood public high school in Bronzeville.

Results from the 2015 administration of Common Core aligned tests are starting to trickle in. This marks the first year of results in some states, while others have seen several years of falling scores. Some states administered the Partnership for the Assessment of College and Careers (PARCC), others administered the Smarter Balanced Assessment Consortium (SBAC), and a handful administered their own state exams. One thing is consistent however – passing rates plummeted, and the failure narrative is ubiquitous.

You can read more about Illinois’ scores here.

Ohio took the PARCC last year as well, but has already decided to abandon the test for 2016. Results were released last week but the state board did not adopt the PARCC consortium cut scores, instead adopting their own. According to PARCC cut scores, only 35-40% of Ohio elementary and middle schoolers met expectations, but 65-70% will meet expectations with the state adopted cut scores.

You can read more about the Ohio cut scores here and here.

Like other states, the release of SBAC scores in Oregon revealed a drop in students meeting expectations. Reports proclaimed “two-thirds of Oregon students read and write well enough to be on track for college or a good job and just 40 percent cut it in math” and a video created by The Oregonian declared, “about half of Oregon students are on track to be ready for college.” A big part of the story in Oregon however was the high opt out rate in some areas of the state. The state as a whole just met the federal 95% participation rate, but not a single high school in Portland met participation targets.

For an analysis of Oregon’s test results, read this.

Maine switched to the Smarter Balanced test last year, but before results were released last week they had already abandoned the test and put out a request for proposal for a new one. Between 2014-2016 Maine has administered three different tests, rendering results all but useless. A Maine headline read, “New standardized test results for Maine public schools are in, but they reveal little.”

Watch union leaders and state officials react to changes in Maine’s assessment program in this video.

Please consider sharing a link to this newsletter, and ask your friends and colleagues to join our network so they too can stay informed. It is up to all of us to do what we can to preserve and protect our public schools.

Thanks for all you do, 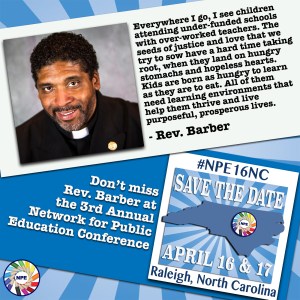 Rev. Barber is the current president of the North Carolina State Conference of the NAACP, the National NAACP chair of the Legislative Political Action Committee, and the founder of Moral Mondays.

You can read more about Rev. Barber and #NPE16NC on our website.

The Network for Public Education is an advocacy group whose goal is to fight to protect, preserve, and strengthen our public school system, an essential institution in a democratic society.

Over the past two years, donations to The Network for Public Education helped us put on two National Conferences, and the first PUBLIC Education Nation. In the coming year, we will hold more events, and work on the issues that our members and donors care about the most!

To make a tax deductible donation, go to the NPE Fund website. We accept donations using PayPal, the most trusted site used to make on-line payments.